“I was really scared to get on stage and talk about women… In the business world…you never talk about being a woman, because someone might notice that you’re a woman…If you say ‘woman,’ people on the other end of the table think you’re asking for special treatment, or complaining. Or worse, about to sue them.”

” I had gotten on a plane the day before (to go give the first TED talk), and my daughter was 3, she was clinging to my leg: ‘Mommy, don’t go’.”

“I had to tell my stories. My stories of still not feeling as self-confident as I should, in many situations. My first and failed marriage. Crying at work. Feeling like I didn’t belong there, feeling guilty to this day. And part of my journey… is all about being more open and honest about those challenges, so that other women can be more open and honest.”

By now, we all know about Sheryl Sandberg’s 2010 TED talk, “Why We Have Too Few Women Leaders,” which became her best-seller, Lean In. Only recently, though, did I learn about her second TED talk, where she spoke about more personal issues and what has happened in the three years since she first spoke out on a national scale.

I especially appreciated this talk – actually an informal interview with Pat Mitchell, the trailblazing journalist who first convinced Sheryl to speak out – because it enabled me to see Sheryl the person, the mom, the woman, as well as the Facebook COO and famous author.

I highly recommend you carve 17 minutes out of your busy day to watch it. It will make you laugh (she’s funny!), nod your head in agreement, shake it in disgust, and end up feeling hopeful.

Perhaps best of all, it will give you a first-hand look at who this inspiring woman really is, unmediated by slanted reporting, gushing or opinionated blogging, or media hype.

Almost exactly a year ago, the startup toy company, Goldie Blox, released a soon-to-be-viral video ad in which a group of little girls gets bored watching a princess show and jumps up to create an elaborate Rube-Goldberg-type machine out of their oh-so-pink toys.

Engineer Debbie Stirling, who started her company with funding from Kickstarter, aims to offer girls toys that will spark their interest in engineering. To do this, she has to tackle two obstacles. First is the lack of toys that mechanical-minded little girls can play with. Thus, her first video, showing what the kids could do with the toys they have.

When a shirt reveals more than it hides

Okay, there was this British scientist who worked on the Rosetta Project, who made the mistake of wearing a bowling shirt covered with cartoon erotica (all female) when he appeared on TV. Then there were the people (men and women) who pointed out how mindless, sexist, and/or discouraging this was. Then there were the people who pointed out how stupid, death-worthy, and hysterical the first set of critics were.

I want to say, Enough, already!  But before I do, I want to share three brief viewpoints with you. 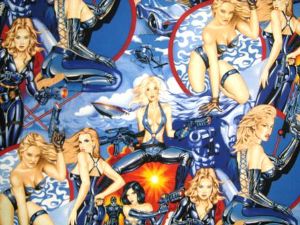 “I’m a fake. An imposter. I don’t belong here. Those aren’t Radiohead lyrics. This is how women in the technology industry feel. We feel like we don’t belong. We feel exiled from a sector that increasingly courts us as customers,” wrote Belinda Parmar, CEO of Lady Geek, and a World Economic Forum Young Global Leader, wrote on the World Economic Forum blog. “When an image of Matt Taylor, the lead scientist of the Rosetta mission, was seen all over the press with a shirt with scantily clad women on it, is it really any surprise that women feel like they do not belong?”

“There must be room in our world for eccentricity, even if it offends the prudes, and room for the vague other-worldliness that often goes with genius,” wrote the mayor of London, Boris Johnson, in an article in the Telegraph entitled “Dr Matt Taylor’s shirt made me cry, too – with rage at his abusers.” “Dr. Taylor deserves the applause of our country, and those who bash him should hang their own heads and apologise.”

My view?  When in doubt about whether a remark, an image, or an attitude about women is “fair play” or offensive, simply substitute race for gender. In other words, if Dr. Taylor had worn a shirt – in an international news broadcast or not – with cartoon images of partially clad African Americans toting guns and flaunting their secondary sex characteristics, would that have been offensive?

No question about it.