This is the first in a series of Guest Posts by winners of our 2017 Guys Who Get It Awards, who shared their best practices in Gender Partnership with attendees at our awards event in January.

Steve Dunmore is CEO Schools, North America at Sodexo Inc. Among other achievements, his organization feeds 2 million schoolchildren every DAY. On the financial side, his sector brings in $1.2 BILLION a year for the 18th-largest company in the world.

Sodexo ensures that its clients – corporate and government employees, healthcare patients and providers, students and faculty, sports and leisure venue attendees, retirees and others – have access to nutritious meals, healthy and productive environments, and healthy lifestyles.

The company has an excellent track record of gender diversity – their Board is 38% women and it has 43% women in its senior leadership. They also track diversity and inclusion when calculating bonuses. Steve’s own track record is very impressive – in the first half of FY16, 52% of the General Managers he hired were women as were 69% of the General Managers he promoted.

On a personal note, Steve says that his best career accomplishment was to pass up a lucrative promotion at Ford Motor Company to follow his wife and baby daughter to Chicago for the sake of her job. It was not only the best decision for his family, but it eventually led him to Sodexo. 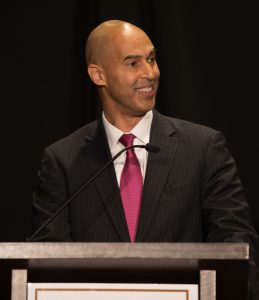 When Sodexo looked at the strength of its teams, it validated that when you have teams with 40 to 60% women, they perform better. So, we have quantitative data on this, and it helps provide a business case for those who need a little more convincing that gender equality is not just right thing to do, but also good business.

Sometimes you hit organizational barriers or challenges when advocating for women to get stretch assignments or promotions. The biggest barrier is human nature. People tend to gravitate towards things they can relate to, people who look and act like them.

When advocating for a woman, this tendency makes it that much more important that you get the decision-maker to understand the potential you see in the woman and why she is the best candidate for the position.

Another thing that is important is that sometimes women are not as vocal in male-dominated environments. As a leader, it is your responsibility to make sure that they have a voice and you spotlight on them in a positive way. When you do so, you are also modeling this behavior for other men.

You need to ensure that you have more gender-balanced teams. Adding women to your team to make this happen should not be perceived as a risk but as good business. It’s well documented that gender balanced teams perform better.

Actually, I think this goes beyond supporting gender balance: In the workplace, it is leadership. When you think about the core leadership that has courage to do the right thing, you must have courage to make the right call. The best leaders I have worked for have looked at diversity as extremely important and recognized individuals who are being courageous and getting results.