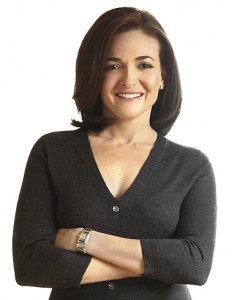 Facebook COO Sheryl Sandberg has been circling the globe and stirring things up in the year since her best-selling book Lean In was published.  People, especially in the media, have a lot of different opinions about Sheryl’s call to action, but whatever your view, you gotta love a woman who stirs things up!

Now she’s at it again with a new campaign. It’s called Ban Bossy, and it seems to have riled up even more people than Lean In did. It calls for parents, teachers,coaches and other influential adults to stop using the word bossy to describe girls’ behavior because it discourages them from pursuing leadership roles. Partnering with Sheryl in this public service effort are former Secretary of State Condoleezza Rice and Girl Scouts USA CEO Anna Maria Chávez.

“We call girls ‘bossy’ on the playground,” Sheryl told ABC News last month. “We call them ‘too aggressive’ or other B-words in the workplace. They’re bossy as little girls, and then they’re aggressive, political, shrill, too ambitious as women… This is a word that is symbolic of systemic discouragement of girls to lead. We are not just talking about getting rid of a word… We’re talking about getting rid of the negative messages that hold our daughters back.”

Words like “bossy” send a message: Don’t raise your hand or speak up. By middle school, girls are less interested in leading than boys—a trend that continues into adulthood. 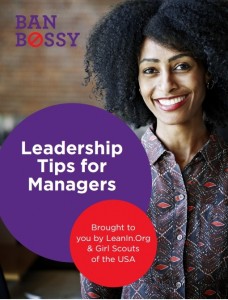 Lean In and the Girl Scouts have produced some excellent materials on how to counter the behaviors and practices that have given the “bossy” label so much power over the choices women make. Their excellent pdf “Leadership Tips for Managers” focuses on how to overcome gender bias on your team and in your organization. It offers ten specific steps you can take and supports those recommendations with statistics and advice from top women CEOs. I hope you’ll take a look.

And frankly, it would be a great tool for our male allies to use, too. As Sheryl told to The Boston Globe recently, “What’s clear is that we won’t get to equality by just women working on it alone. We only get to equality if men and women work on it. And it has to be men doing it not just as a favor to women in their lives, but because it’s good for THEM.”

Last but definitely not least, Ban Bossy has put together great tips to help girls flex their leadership muscles. Different pdf versions of tips have been created for girls themselves, their parents and their teachers. Visit banbossy.org and look for the Leadership Tips drop-down menu.

P.S. Sheryl just published a new edition of her book. Lean In: For Graduates. It is tailored for women just entering the workforce and includes six chapters of advice from experts on finding and getting the most out of a first job. It also includes a chapter intriguingly entitled “Man Up and Lean In.”