This is the second in a series of Guest Posts by winners of our 2017 Guys Who Get It Awards, who shared their best practices in Gender Partnership with attendees at our awards event in January.

Bill Fitzsimmons is Executive Vice President, Global Regulatory Affairs, Clinical and Research Quality Assurance of Astrellas Pharma. In addition to those roles, he serves as the executive sponsor of Stellar Women, their Employee Resource Group dedicated to the advancement and equality of women in the workplace.

As sponsor of Stellar Women, Bill has demonstrated consistent and long-standing support for women’s empowerment at Astellas. Bill has mobilized male advocates to stand up and step up for Gender Partnership. He established a men’s advocate network within the women’s employee resource group and assists in developing those members to mentor and sponsor their female colleagues.

Bill is a “Guy Who Gets It” to the core. He is a steadfast advocate for gender equality in the workplace and in life.  He hopes that his son – now 25 – will see him as a role model for how to work side-by-side with women in his career – and be inspired by the aspirations of his sister, who is his biggest cheerleader. 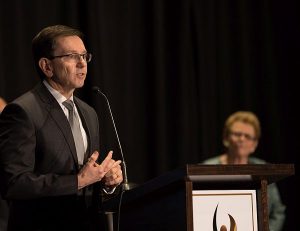 When male supervisors want to step up, I tell them they need to know there are differences in how male and female employees act. They need to support female supervisees and nudge them when these women think they are inadequate for new assignments or can’t do the job.

Male supervisors tend not to press the women – they say, “I tried” or “I asked if she wanted job, but she said no.” We need them to help show women that there may be ways to juggle work and life to make a more responsible job work for them. We shouldn’t force them, but listen to them and talk with them.

As to executives, I tell them they need to sponsor, not just mentor, women. This needs to be to be an obligation. These executives have been given lots of privileges, and this is a way to give back.

I also show male leaders the metrics. We are a data-­‐driven organization. Guys respond to data -­‐-­‐ put metrics in front of them and it   works.

For our women, our best practice has been creating the annual Women in Action conference. It is a big event and creates an awareness and motivation that is continuing.

It is a wakeup call for everyone. It is also a big investment, but a great way to continue the momentum of waking all of us up to gender equality.

GENDER PARTNERSHIP, MEN WHO GET IT, WOMEN'S LEADERSHIP