For me, one of the big accomplishments this year in women’s empowerment is the creation of our Institute for Gender Partnership™. We have made extraordinary progress convincing some of the biggest and most influential companies in the country to engage their male leadership in the effort to eliminate gender bias and actively help women rise through the ranks.

This is especially satisfying for me because I have been working with men, training them how to be equal partners at work with women, for over 25 years. Now the ball I saw slowly bumping its way down the hill in the mid-’90s is starting to snowball, and I couldn’t be more proud of the guys who are doing it! 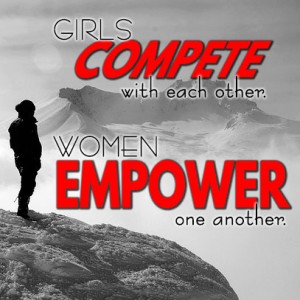 This brings me to the other part of the equation that is necessary for full Gender Partnership: Shifting the behavior of women who still view other women as competitors or inferiors. Just as men grew up in a culture that believed women were “less than” – less smart, less able, less competent, less important – so did women. Many of us have shifted this context, but not all.

You can see this in action in conference halls, meeting rooms, lunch rooms, every place where women don’t stick up for or speak up for each other. Or, where they stand silent when men interrupt, take credit where it’s not due, or in some way ridicule or perpetuate bias against women.

Whatever reasons we think we have for not coming to the aid of our sisters at work, they aren’t good enough. Jealousy? Not a good enough reason. Envy? Ditto. Fear of being pushed aside by a new face? I don’t care. We absolutely have to shift the prevailing context that other women are on their own in this struggle. We have to be bigger than that.

Imagine what could happen at work and in the world if everyone in a meeting, at a conference session, or around a lunch table was committed to enabling women to be heard, their ideas to be recognized, their strengths to be given equal opportunities.

Now that’s a world I want to live in! And it’s up to us women to do our part in creating it, especially now that a number of us have reached greater positions of power. I want to challenge everyone to shift your prevailing context in 2016 (and beyond) to one that will truly level the playing field.

The new context I suggest is something you’ve probably heard before. Emma Watson said it 18 months ago when she talked about her decision to spearhead the U.N.’s HeForShe campaign. I want you to hear it loud and clear inside your own head whenever you see a woman being ignored, disdained, or pushed into the background (or going there of her own accord out of fear or lack of confidence).

The moment you realize this woman needs help, you say to yourself,

Then you act. You speak up in her behalf, you use your power to help and teach her. Because, if not you, who?

Rayona discussing ways we can all empower each other