The results of a recent study of more than 300 senior executive women across North America show that some of the weaknesses often attributed to women executives – like lack of self-confidence – are purely in the mind of the beholder. Other findings are equally thought-provoking. 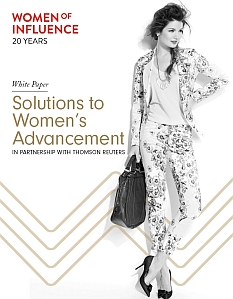 The study was done by Thomson Reuters in partnership with Women of Influence, and Barbara Annis & Associates. Their goal was to discover why, given the fact that “since the 1980s,  women have received more advanced degrees than men and have held half of all middle management positions,” many do not advance any further in their organizations. So they asked the women themselves. Is it really lack of self-confidence, as several “experts” claim?

Apparently not!  Eighty-four percent of these women leaders reported having high self-confidence and high self-respect, and being self-assured in what they think and feel. This is a very positive change from earlier research where, the report points out, women have often said they “have to behave more like men in order to succeed.”

Despite their confidence and self-assurance, though, many women executives rated their success in advancing their careers as much lower than other areas. Their greatest challenge, they reported,  is in finding new opportunities to navigate the system (77 percent) and effectively negotiating the chain of command (80 percent).

An even greater obstacle to career advancement is the temptation to opt out.  Fifty-nine percent report that choosing to quit – or to stay but disengage – is the reason women leaders don’t reach the C-suite. (It is not work-life balance that is causing the problem, however — only 20 percent said that was their greatest barrier to moving up the corporate ladder.)

“Many of the women in our study have—at one time or another—considered dropping out themselves,” the authors write. “Regardless of their self-confidence, their ability to do the job, and lead others to achieving organizational goals, many women, particularly at the senior level, still find the business culture unwelcoming and an impediment to their career advancement.”

As one participant put it, “There are NO barriers, if you have a positive attitude, a great skill set, and the ability to move ahead. If one finds a stumbling block, you may need to change companies or organizations in order to move ahead.”

That attitude is good news for the women who have it, but bad news for the companies they work for. The cost of replacing an executive can run up to 213 percent of that executive’s salary, according to a broad-based study by The Center for American Progress.

Can anybody take a hint?

P.S. This is a very encouraging report on women executives — but why is there a tousled woman in a fashion-model stance on its cover?