Just over two years ago, Credit Suisse, a global financial services company headquartered in Zurich, sent a shock wave through the business world with its study showing that companies with women board members had better financial results than companies with all-male boards. 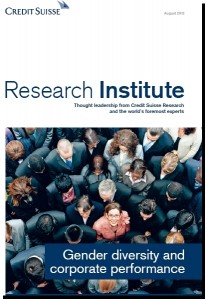 To be specific, Credit Suisse’s Research Institute reported that the shares of some 2,300 companies with a market capitalization of more than $10 billion that had mixed-gender boards outperformed comparable businesses with all-male boards by 26% worldwide for a period of six years.

Now, just last week, Credit Suisse announced the results of a new and larger study that reviews (and confirms) those findings and also examines the effects of having more women in senior management positions. (Click on the report covers to download the full reports.)

This new study tracked the gender mix of some 28,000 executives at 3,000 companies in 40 countries around the world on an ongoing basis. (This enabled a deeper analysis of gender partnership and its impact at the day-to-day operational level rather than just measuring the benefits of having women in the boardroom.) It then compared that data to the financial results of the companies. 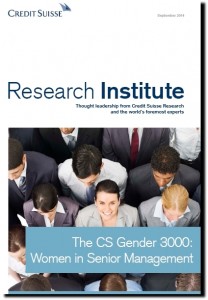 The results? The higher the ratio of women in “front office” senior management jobs (CEO, leader of major business unit, and top financial and strategic jobs), the better the company’s stock market performance.

The study found a correlation between companies with more female executives and higher returns on equity, higher valuations, better stock performance, and higher payouts of dividends.

“There’s a very strong outperformance of companies that have women in management, particularly in operational roles,” said Stefano Natella, Credit Suisse’s global head of equity research.  For example, when the bank compared companies where women filled less than 5% of the “front office” jobs versus those where they filled more than 10%, it found a 27% higher return on equity and 42% higher ratio of dividend payouts.

When slicing the data even finer, researchers found that companies where 50% or more of the “front office” jobs were held by women had average annual returns of 28.7%, compared with returns of 19.1% for all companies studied.

The Rest of the Story

Unfortunately, while more women now hold leadership roles (an increase on boards from 9.6% in 2010 to 12.7% at the end of 2013), few are on the CEO track. They tend to work in legal, human resources and marketing – areas of less influence that offer less opportunity to move into the most senior positions.

This means that most of the real power remains in male hands.  The reason this is a problem – other than from a social justice point of view – is exactly what I described earlier in this post: More women in powerful positions = Better financial results.

Caroline Fairchild, editor of Fortune’s excellent newsletter, The Broadsheet, writes, “In all regions and in most sectors, women have a significantly larger representation in roles like human relations, public relations, and legal than in operational roles. Support… jobs tend to carry less influence with the company, which translates to a shortage in power for women at the top.” Read the rest of Caroline’s report on this aspect of the Credit Suisse study.

What “the Story” Is Really About

Statistics aside, I found these paragraphs in the Key Findings section especially important.

“It is crucial to stress that the analysis that we con­duct in the report is not about judging the ability of one gender versus another but the importance of diversity in decision-making. A fascinating study led by Pro­fessor Anita Woolley at Carnegie Mellon… shows that it is not the greatest ability that leads to the best answer or outcome. “

“Within a group working together, the presence of a woman within the group is one of the key factors that influences the group’s collective “intelligence” or in other words the ability of the group to make successful decisions. Skill sets are different, one is not necessarily better than another, but enabling seems as important as being able. This was also a key message of our initial report [in 2012].”