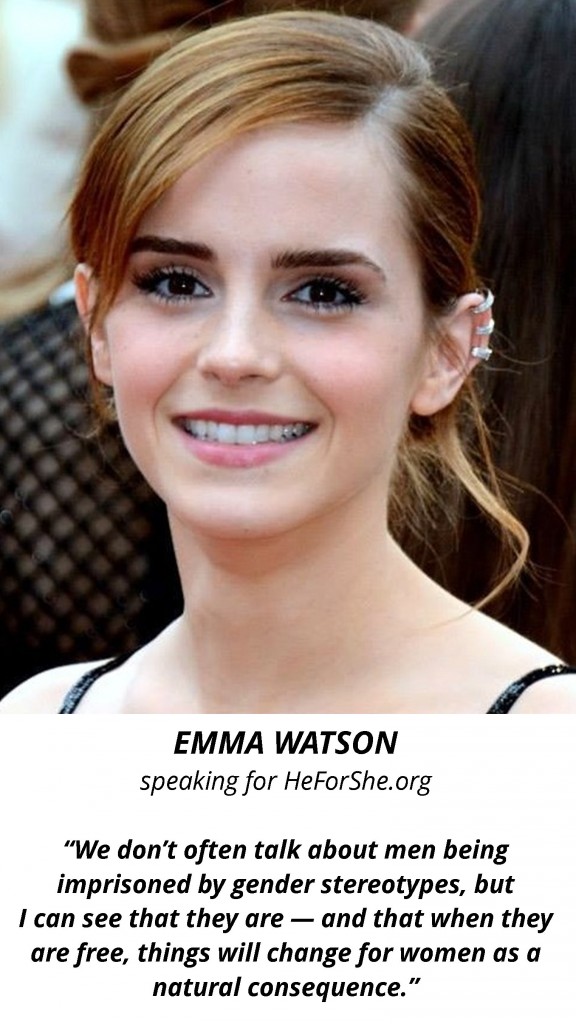 You may have heard the great news by now — on Saturday, actor Emma Watson, known worldwide for playing super-smart and feisty Hermione Granger in the Harry Potter films, spoke out in her new role as U.N. Women Global Goodwill Ambassador, launching the HeForShe campaign, a movement in support of women’s rights and full equality between women and men.

This initiative is a defining moment in our work to achieve full gender partnership. HeForShe aims to enroll ONE BILLION men in the course of the coming year — it’s a game worth playing for the United Nations and another alliance that strengthens our work at IWL and the Institute for Gender Partnership.

Speaking at U.N. headquarters in New York, Watson was both outspoken and compassionate about her mission.

“I want men to take up this mantle so their daughters, sisters and mothers can be free from prejudice, but also so that their sons have permission to be vulnerable and human too — reclaim those parts of themselves they abandoned, and in doing so be a more true and complete version of themselves.”

This is a woman after my own heart and mind. Since the mid-1990s, when I added a co-ed course to the IWL curriculum called Partners Leading Change, I have been advocating for and teaching men how to walk alongside women on the journey to gender equality.

I believe that women can’t — and won’t — advance to full gender partnership in the business world or anywhere else unless we can engage the support of men. This is because men still hold the power in our world.  They also (typically) have different talents and skills than women. When women and men combine their knowledge and wisdom, we become far more than the sum of our parts. (The equation I use to express what happens with full gender partnership is 1+1=3.) Finally, we need all the people we can get to champion the cause of gender equality, especially those in the pool of talent I call “guys who get it.” In my experience, these men are impassioned, determined, and effective. Let’s use ’em!  (I wrote about this in depth in a post last June.)

“How can we effect change in the world when only half of it is invited or feels welcome to participate in the conversation?” Watson asked the audience. “Men, I would like to take this opportunity to extend your formal invitation. Gender equality is your issue, too, because to date I’ve seen my father’s role as a parent being valued less by society… I’ve seen men made fragile and insecure by a distorted sense of what constitutes male success. Men don’t have the benefits of equality either.”

Watson, a recent graduate of Brown University, continued, “You might be thinking who is this Harry Potter girl? And what is she doing up on stage at the UN? … I don’t know if I am qualified to be here. All I know is that I care about this problem, and I want to make it better.”

“English statesman Edmund Burke said: ‘All that is needed for the forces of evil to triumph is for enough good men and women to do nothing.’ In my nervousness for this speech and in my moments of doubt, I’ve told myself firmly—if not me, who, if not now, when?”

“Because the reality is that if we do nothing, it will take 75 years — or for me to be nearly 100 — before women can expect to be paid the same as men for the same work… If you believe in equality, I am inviting you to step forward, to be seen, to speak up, to be the he for she. And to ask yourself: If not me, who, if not now, when?”

The HeForShe.org website describes the campaign as “a solidarity movement for gender equality that brings together one half of humanity in support of the other half of humanity.” Over the course of the next 12 months, it intends to mobilize one billion men and boys as advocates and agents of change for gender equality. The site includes a pledge that it invites men to sign. It reads, “Gender equality is not only a women’s issue, it is a human rights issue that requires my participation. I commit to take action against all forms of violence and discrimination faced by women and girls.”

The website has an interactive map showing the number of men that have made this HeForShe Commitment. You can click on a country and see how many men there have signed the pledge. In checking it over a four-hour span today, I found the worldwide number grew in that time from 77,000 to 95,000, and the number of men in the U.S. who had signed the pledge from 25,400 to 29,900. And word about this is just starting to get out. This is great news for humankind!

GENDER BIAS, INSPIRATION, MEN WHO GET IT, POPULAR CULTURE