Last week, amid the posts and news articles about Women’s Equality Day on August 26, it might have been easy to miss the impressive announcement from Gap, Inc.

Here it is, short and sweet: Research shows that women and men at Gap, Inc. receive equal pay for equal work.  In addition, almost half of Gap’s executive vice presidents and higher-ranked executives are women. 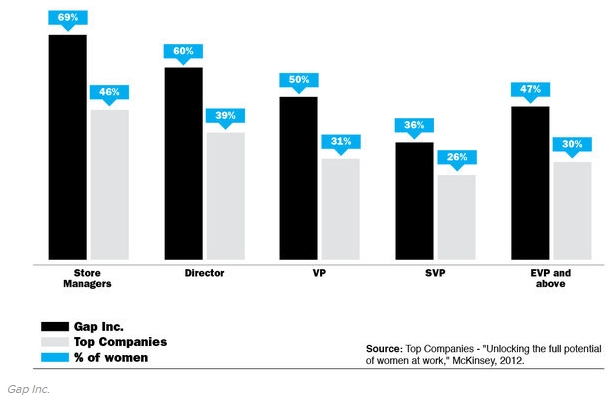 Gap, which also owns Old Navy, Banana Republic, Athleta and Piperlime, started out on the right foot: It was founded in 1969 by a husband-and-wife team, Donald and Doris Fisher. 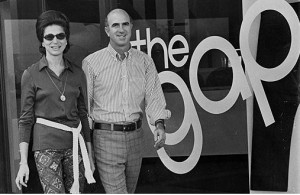 Doris and Donald Fisher founded the Gap in 1969

“Starting with co-founder Doris Fisher, we have a proud tradition of developing and promoting strong women leaders and mentors – from our stores to our divisions to our senior management,” Gap chief executive officer and chairman Glenn Murphy.

I commend Gap for this achievement, and I want to add a personal note of congratulations to my friend and colleague Eva Sage-Gavin, who for ten years – until 2013 – was their EVP for Global Human Resources and Corporate Affairs (aka Chief People Officer). These excellent results are part of her legacy at Gap.

Best of all, it will force other retailers to “up their game” in terms of advancing women if they want to successfully compete for talent.

Gee, They Know How to Spell ‘Abrasive’

Linguist and high tech manager-turned-entrepreneur Kieran Snyder reported on Fortune.com last week about a study she undertook to find out if gender plays a role in the type of feedback employees receive on their performance reviews.

Snyder, who holds a Ph.D. in linguistics, gathered 248 performance reviews from 28 different companies, ranging from large technology corporations to small startups. These reviews were voluntarily submitted by 180 male and female managers. 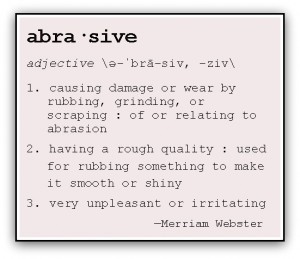 Many of the reviews – about 71% – included critical feedback, as you might expect. But a much higher percentage of women (an overwhelming 87.9%) received criticism than men (58.9%). In additional, criticism of the women was less constructive and more personal. (The critical feedback for men was mostly about developing additional skills.)

“Abrasive” was used 17 times to describe 13 different women, but the word did not appear a single time in any of the men’s reviews.

Snyder also found that the gender of the reviewing manager made no difference in her results. Female managers wrote 25% of the performance reviews analyzed and provided just over 23% of the negative critical feedback. 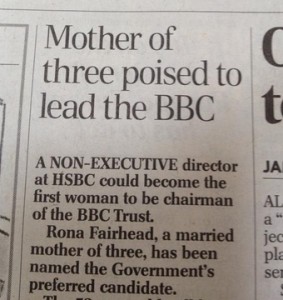 The BBC is about to get its first female chair. Former Financial Times chief executive Rona Fairhead has been tapped to be the new chair of the BBC Trust, the august governing body for the British Broadcasting Trust.

Fairhead is on the board of PepsiCo, has held top leadership positions in the aerospace and specialty chemicals industry and is a member of the British Cabinet. In 2012 she was named a Commander of the Order of the British Empire.

In a teeth-gnashing move, however, London’s Daily Telegraph announced Fairhead’s selection by touting her skills… as a mother. Really? Really?

Back on our side of the pond, Megan Smith, a longtime vice president at Google, is strongly rumored to be the top candidate for U.S. chief technology officer, according to Bloomberg.

Smith, currently VP at Google’s X Lab, is a “tech evangelist” who has led Google’s Business Development team and the acquisitions for the company of Keyhole (Google Earth), Where2Tech (Google Maps) and Picasa. She serves on the boards of MIT, Vital Voices, is a member of the USAID Advisory Committee on Voluntary Aid and co-founded The Malala Fund.

A graduate of MIT, she was a member of the MIT student team that designed, built and raced a solar car 2000 miles across the Australian outback in the first cross-continental solar car race.