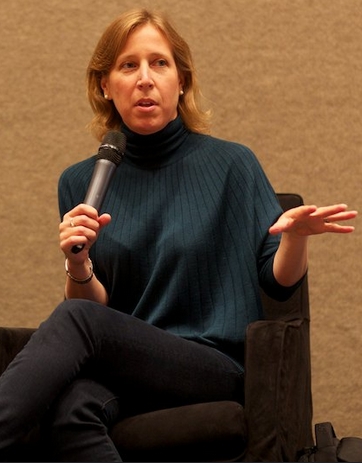 Progress!  “An extraordinary executive” who is days away from delivering her fifth child was named Tuesday to the board of the highly successful customer relationship management company Salesforce.

Susan Wojcicki, 46, is CEO of YouTube, a subsidiary of Google. She took the position last February, when she was four months pregnant. (It was a nice parallel to the time back in the late ’90s when, four months pregnant, she was asked to join “ten guys in little startup called Google.”)

“When you’re a junior-level woman and get pregnant, people always ask if you’ll quit. But no one asks me that now,” she told USA Today.

Salesforce, an S&P 500 cloud computing company named by Forbes as “Most Innovative Company” for four years in a row, has an eleven-member board, two of whose members are now women.

Very few CEOs are pregnant during their term of leadership, the most notable exception in the U.S. being Yahoo’s Marissa Mayer, 37, whose first child, Macallister, was born on Sept. 30.  Mayer left Google in July – 7 months into her pregnancy –to lead a high-profile turnaround at Yahoo. She was the first person ever to take charge at a Fortune 500 company while pregnant.

Macallister made his first public appearance at Yahoo’s Halloween Party. As you can see, he came as a sleepy chili pepper.

U.K. executive Helena Morrissey, however, wins the “Chief Expecting Officer” award. She is CEO of Newton, a global investment firm managing the equivalent of $80 billion in assets, and a mother of nine children, ranging in age from 5 to 22. 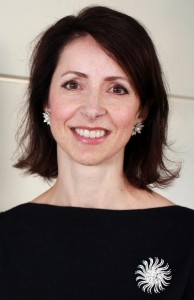 Morrissey became pregnant with her first child in 1992 while a bond fund manager for the asset management firm Schroders. She left the firm because they denied her promotion, worried that she might not concentrate full-time on her work after she had her baby. (A move they deeply regret….)

She then joined Newton, and proceeded to move up the corporate ladder while giving birth to five children. At the age of 35, she was promoted to CEO. Her youngest children had just turned 3, 2, and 1.

Note: There are also 30% Clubs in the U.S. (which I wrote about in May), Hong Kong, Ireland, and South Africa. In the U.S., there are 17 percent women on boards in the S&P 500 companies, considered the equivalent of the U.K.’s FTSE 100. About 10 percent have all-male boards (except for the technology sector, where 50 percent have all-male boards.)

More News About Pregnancy in the Workplace

The Supreme Court last week heard arguments in the pregnancy discrimination case filed by a former UPS employee who was denied a change in position from delivery driver to a light-duty job that would have allowed her to work while pregnant.

Peggy Young’s doctor had prescribed that she not lift more than 20 lbs; UPS drivers must be able to lift 70 lbs. UPS denied her request for temporary reassignment, saying that light-duty assignments were allowed only to workers hurt on the job or who had disabilities recognized under law, a policy similar to those used by employers throughout the country, including the U.S. Postal Service.

Young was forced to take unpaid leave without benefits. Two lower federal courts have already ruled against her case.

Commenting on the UPS argument, Supreme Court Justice Ruth Bader Ginsburg (as reported in USA Today) said, “No one who wanted a dispensation didn’t get it, except pregnant women.”

The court has not said when it will reach a decision on the issue. In the meantime, UPS is changing its policy effective Jan. 1 to allow pregnant workers the type of disability accommodation Young sought for herself. More progress, though not (yet) for Peggy Young nor pregnant women nationwide.