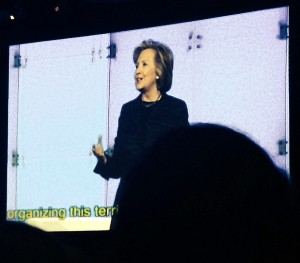 Hillary Clinton speaks to a crowd of 5,000 at Lead On

There is a special energy when large numbers of women come together. It’s a mixture of excitement, determination, and a huge sense of possibility. I got to enjoy it firsthand yesterday when several of my Institute for Women’s Leadership colleagues and I participated in Lead On: Watermark’s Silicon Valley Conference for Women.

Imagine this:  5,000 people – most of them women – over 100 speakers, more than 30 sessions, and more information and inspiration than any one person could take in.

Instead of trying to tell you about the whole day, I am going to give you a few choice quotes – and some choice commentary by yours truly. (If you follow me on Twitter @RayonaSharpnack, you’ve already read some of these juicy tidbits.) 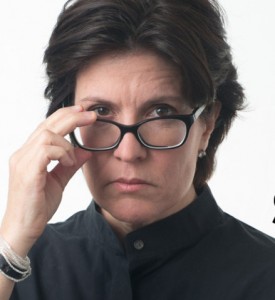 “We’re going to talk about lady things, like leadership and taking over the world in 2016.”

Kara Swisher set the tone for the day. Swisher is The Wall Street Journal’s technology columnist and co-founder of the company that publishes the Re/Code website, home to independent tech news, reviews and analysis. New York magazine calls Swisher “tech’s most powerful snoop” and “Silicon Valley’s most feared and well-liked journalist.” Quite a feat to be both.

Swisher also interviewed Hillary Clinton later in the day. More on that below. Twitter handle: @KaraSwisher 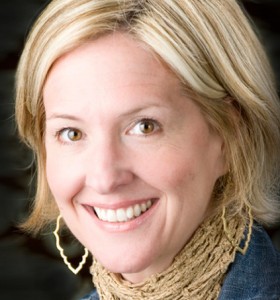 “There is no greater threat to critics than a woman who isn’t afraid to stand back up.”

Author, professor and researcher Dr. Brené Brown‘s areas of expertise are vulnerability, courage, worthiness and shame. Her 20-minute TEDx talk “The Power of Vulnerability” is one of the top five TED talks in the world, with over 18 million viewers. Twitter handle: @BreneBrown

“Talent is universal but opportunity is not.”

Hillary Clinton had quite a few choice words to say, both in her afternoon keynote and the interview she did with Kara Swisher. (You can watch the entire 35-minute interview online.) Twitter handle: @HillaryClinton 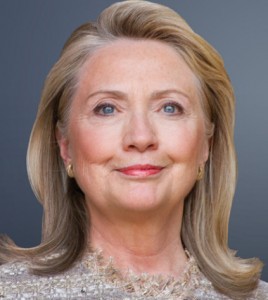 A few more quotes from Clinton:

“This challenge will not be solved by women alone… Gender diversity will take all of us, not just one person, not just women.”

As a woman, executive consultant, and thought leader committed to Gender Partnership, I was especially pleased to hear Bina Chaurasia, SVP and Chief HR Officer at Ericcson, the communications technology and services multinational, emphasize the role men need to play in gender equity. Chaurasia has serious HR chops, too: former VP of global talent at HP, VP of global HR at The Gap, and senior leadership roles in HR at PepsiCo/Yum! and Sun Microsystems.  Twitter handle: @ericcson 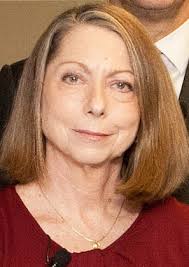 “Sometimes I think being less satisfied and a little angrier is where we need to be right now.”

I grant you, Jill Abramson, formerly and famously managing editor of The New York Times, has good reason to be angry, but I don’t agree with her on this. First of all, who is “satisfied” with the role of women in 2015? Who thinks we don’t have a whole lot further to go?

Second, other than as a motivator to get you off your duff, anger is rarely helpful. It may be cathartic, it may get your energy up, and it may put your enemies down, but it also cuts off communication and dooms collaboration. If we want men to help us create full Gender Partnership in our work and at home, we can’t hold onto our anger at them for past wrongs. We have to start seeing them as part of the solution. I wrote about this in a recent blog post: Aristotle Had It Right. Twitter handle: @JillAbramson (but she hasn’t Tweeted for quite a while) 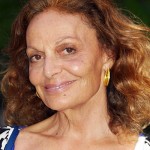 “In my company, men either drive or clean.”

Diane von Furstenberg, designer and philanthropist, may have gotten a good laugh from her female fans on this one, but I find her attitude just as noxious as the traditional Kinder, Küche, Kirche mindset that kept women down for so long.

What are we aiming for, anyway? Full Gender Partnership or to “put men in their place”? Garage, Girlie Mags, and Grunt Work? That is NOT progress.

Hillary Clinton, when asked why the U.S. needed a woman president, replied: “Because we have to make sure that all talent in our country is represented.”

Yes we do, and that includes men, even white men. For an eloquent explanation of this point of view, take five minutes to read “Why White Men Matter” by Sharon Orlopp, SVP and Global Chief Diversity Officer for Walmart.  Furstenberg has no Twitter handle.

With gratitude to my new IWL colleague. Valerie Joi Fiddmont, for helping me capture some of the moments in this amazing day, and a special thank you to the team at Watermark for organizing this event!